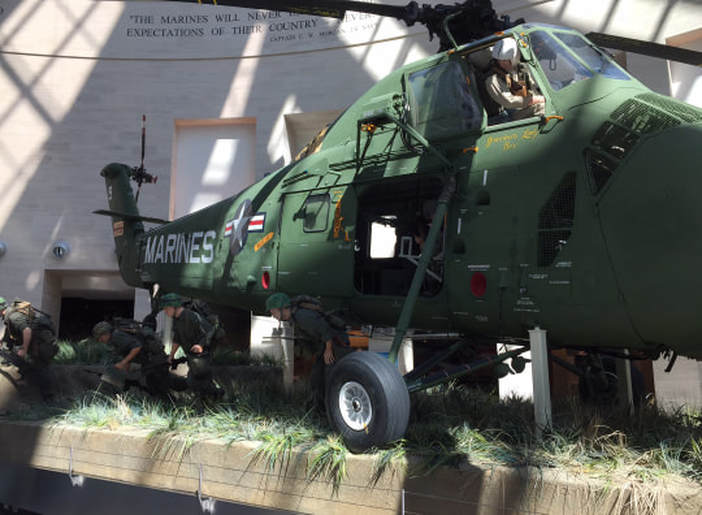 The U.S. Marine Corp Museum at Quantico is probably one of the most amazing and inspiring monuments to fighting men that I have ever seen. Just walking into the main rotunda area with its massive WWII and Vietnam dioramas and vintage planes hanging from the ceiling made the 8 and 1/2 hour drive worth it in my humble opinion. But there was so much more and hopefully these pictures that follow will give you at least a small taste of what Robert and I saw there.
This Sea King Helo with Marine Rifleman from the Vietnam period was probably one of my favorite dioramas. There was just so much going on in the dio and all of the figures were perfectly sculpted and posed to make a scene that really told a story. I can't imagine building full size dioramas, but I sure would like to try.

The museum is actually located off base, so it is accessible to the general public. It is absolutely free and if you don't do it at least once...well, you haven't put enough things in your "bucket". The museum is currently constructing a new wing that will include everything from 911 on and I am definitely going back. 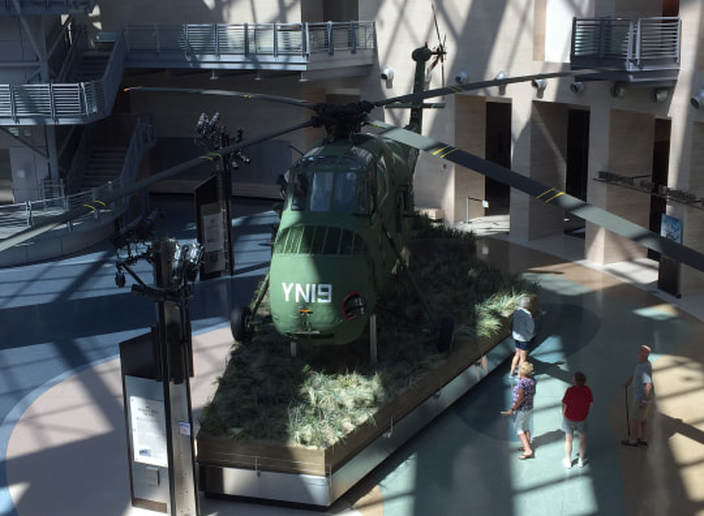 Other side of the hall features this massive beach landing diorama 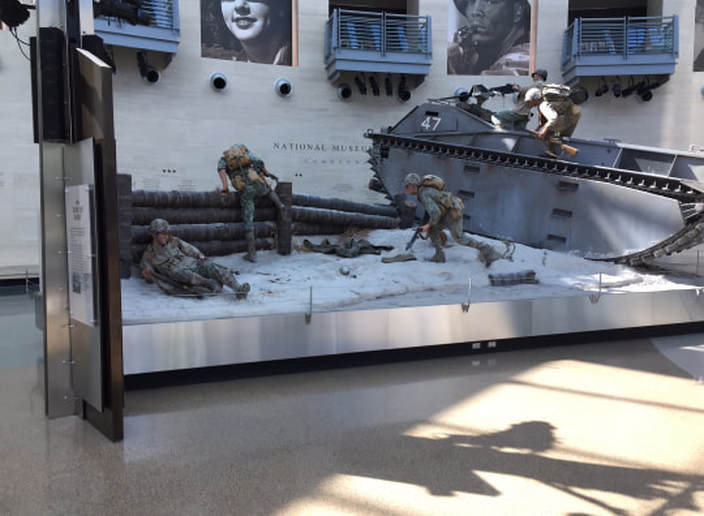 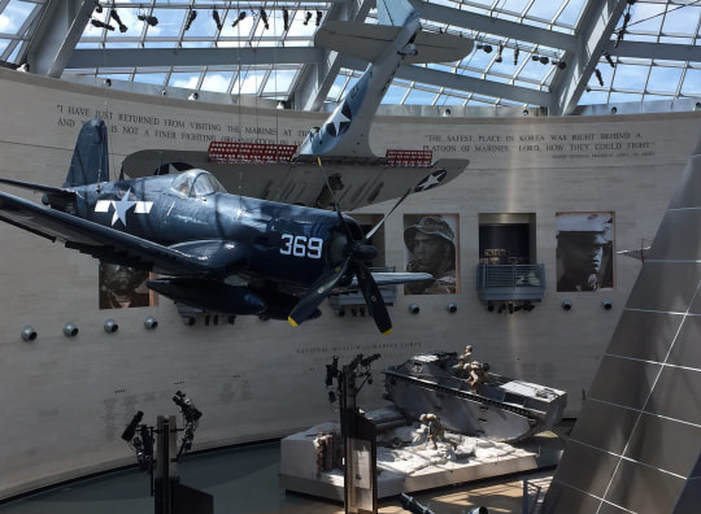 Above the main hall hang aircraft, I have only shown a couple of them here.

The Museum features exhibits from the beginning of the Marine Corps to modern day. Obviously I didn't photograph everything and I wouldn't try to post everything I did shoot. What follows are some of the highlights, including these two shots from the WWI section (a supply truck and a WWI Correspondent).

There was so much, much more...weapons, vignettes, uniforms, photos and documents. 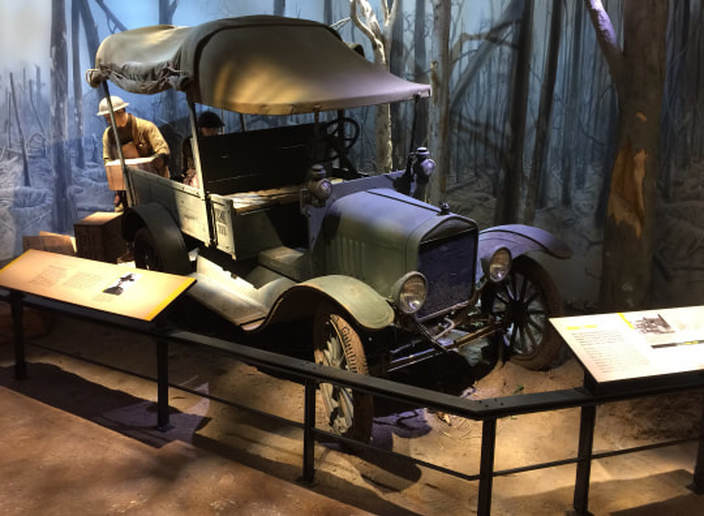 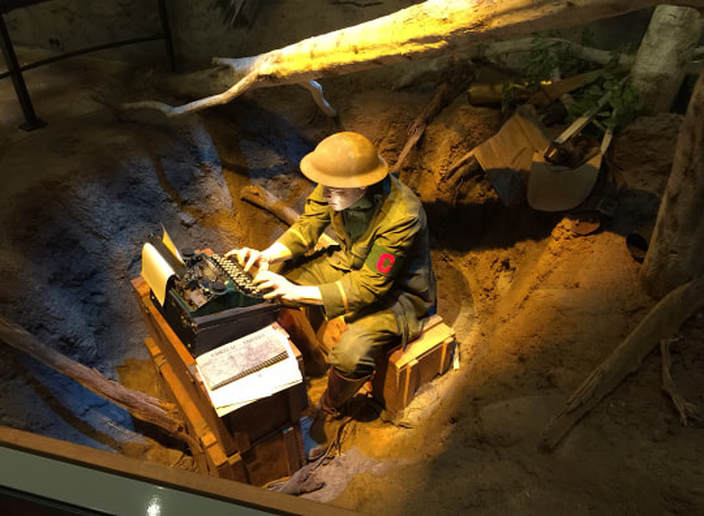 One of the first displays in the WWII section was this beautiful M3A1 Stuart light tank I was just blown away by this baby. Other than in books, I have never actually seen one with the external tanks on the rear deck. Close to this display was a 37mm anti tank gun with crew. I was surprised to see the ammo crates. The ones I made for Panzercommander were almost identical to these and it was neat to see the real thing. 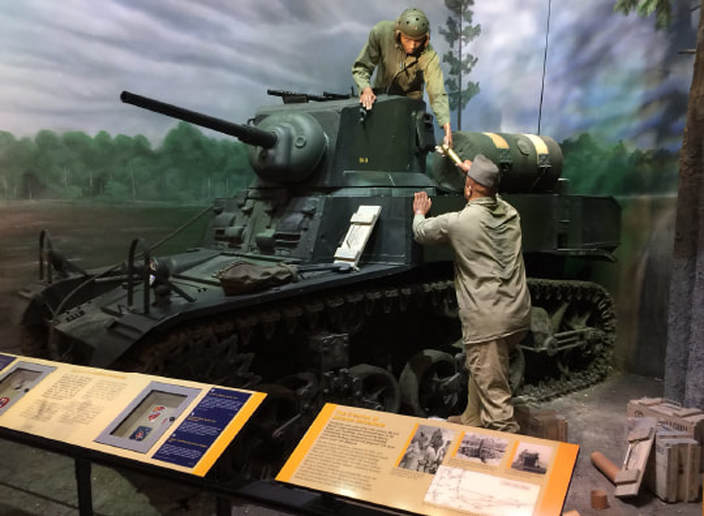 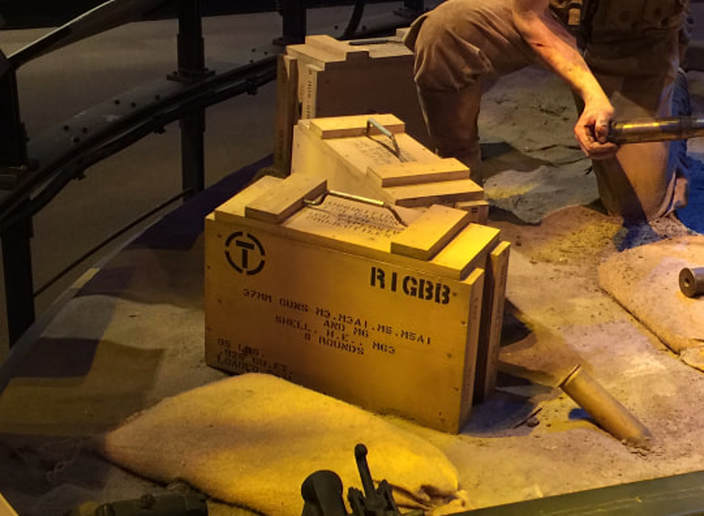 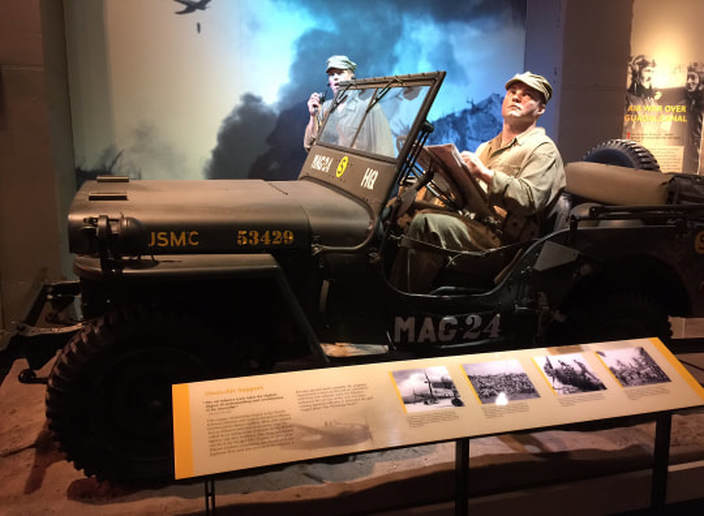 This Sherman was a neat surprise. The added detail of the infantryman talking to the crew with the rear mounted field phone is a nice touch 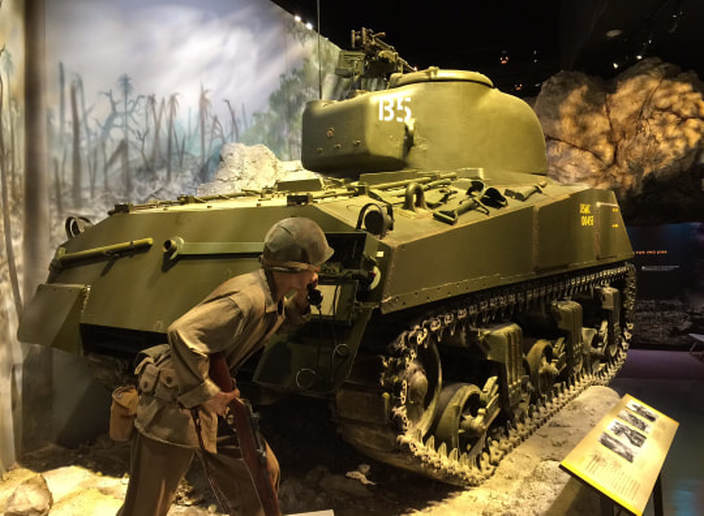 This was one of the coolest displays in the museum (sorry about the reflection). This is flag number two from Mt. Suribachi, Iwo Jima. I did not know there were two; the first one was taken down because it was too small. This is the one from the famous picture. The museum has both. This one was going off display for some restoration work this week, so I am glad we got to see it. 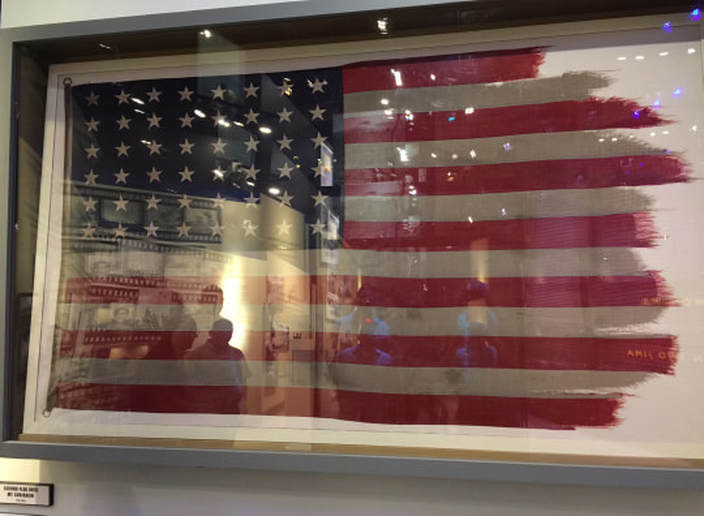 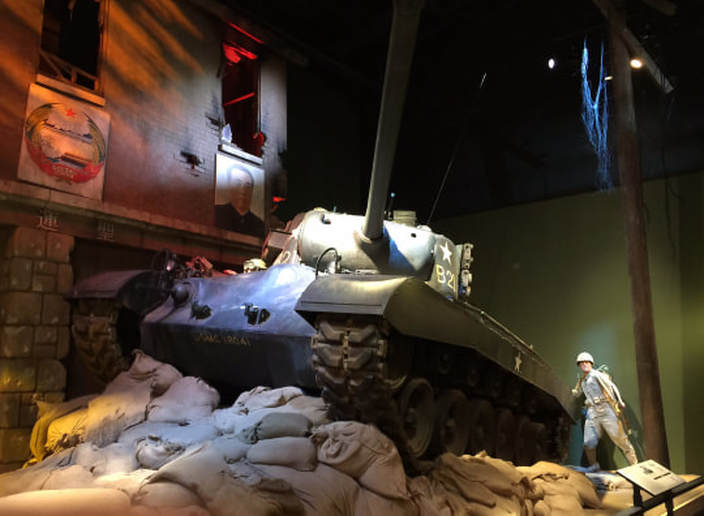 This display was pretty neat, It shows Marines at Chosin Res during a nighttime engagement. What was "cool" about this display was that it really was cool. The room was 20 to 30 degrees cooler than the rest of the museum. And though it didn't show up in any of my pictures. There were simulated tracers flying through the night sky. 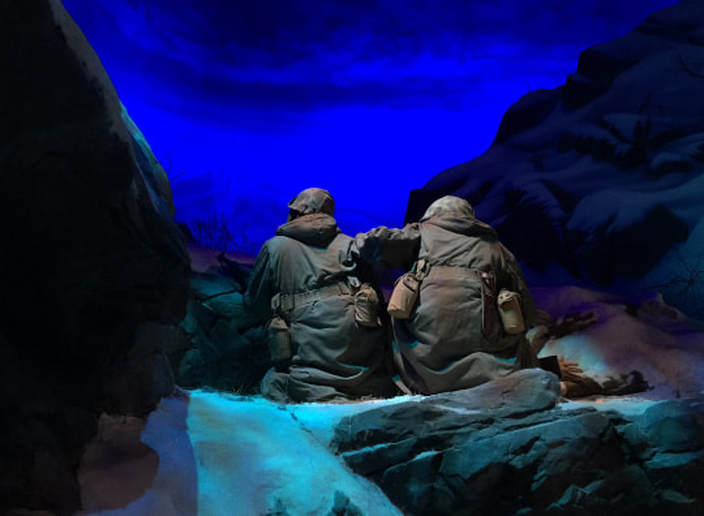 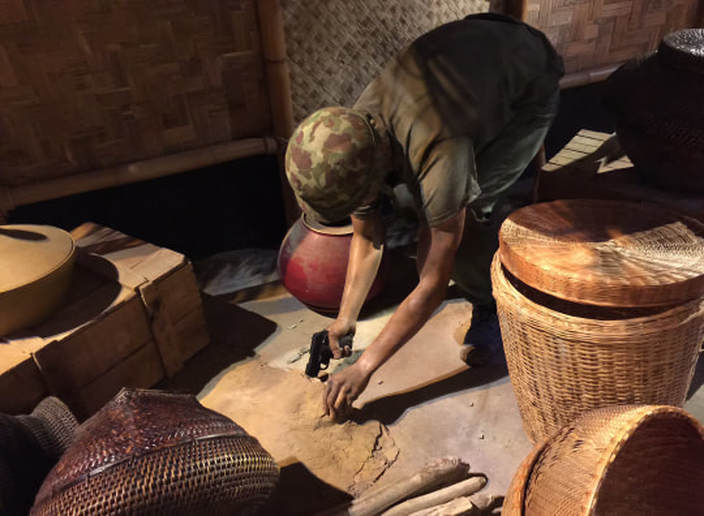 The VIETNAM section was probably my favorite. It included several large dioramas, including the above, a Marine finding the entrance to a tunnel complex next to a hooch. Across from this diorama was another Marine with a  War Dog. 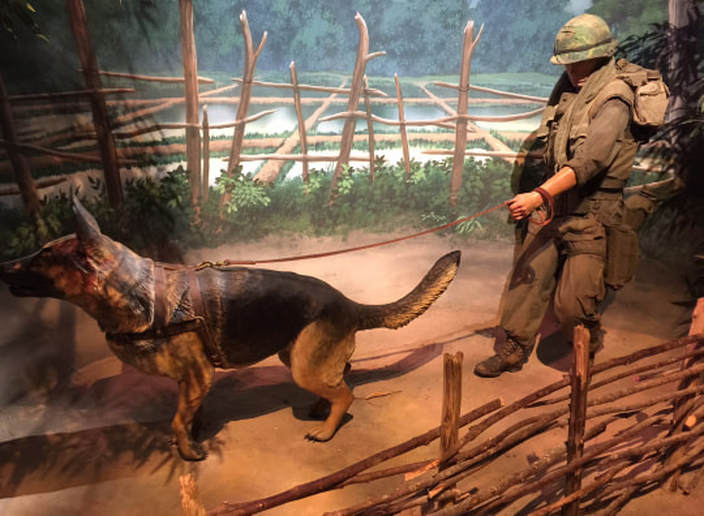 The next diorama was huge because it included an Ontos Armored Vehicle and part of a house. I have never seen a real Ontos before. They are not huge, but I am guessing that they could lay down some fairly destructive fire. 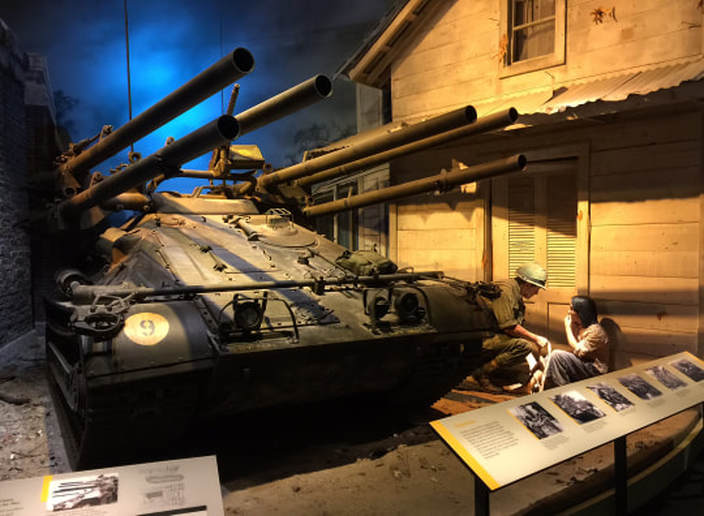 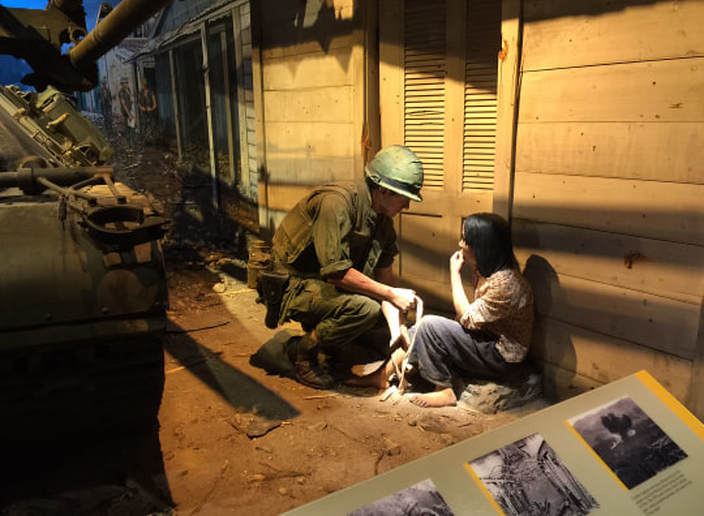 The last big Vietnam display was this firebase siege scene. I wish I could have gotten a shot of the whole thing at the same time, but there was really no way to do it. It kind of circled around the entrance to the display. What was neat was that the floor was covered with sand and red clay, so you felt like you really were walking on dirt ground. The display lighting also changed from daylight to night to create a different feel. I really was pretty sharp. 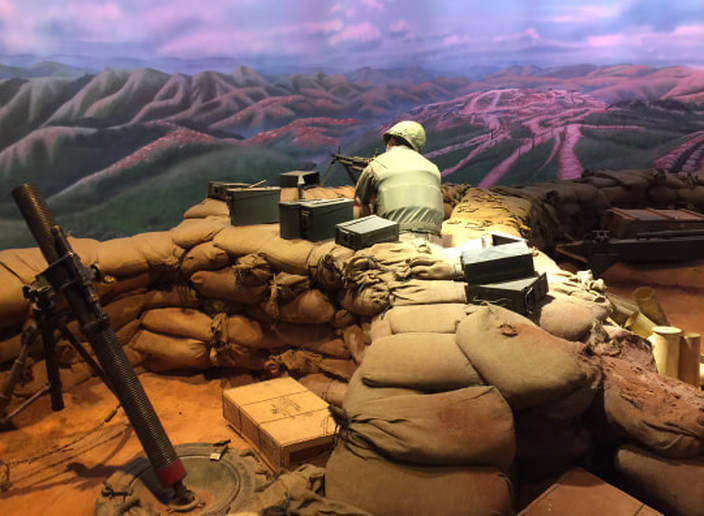 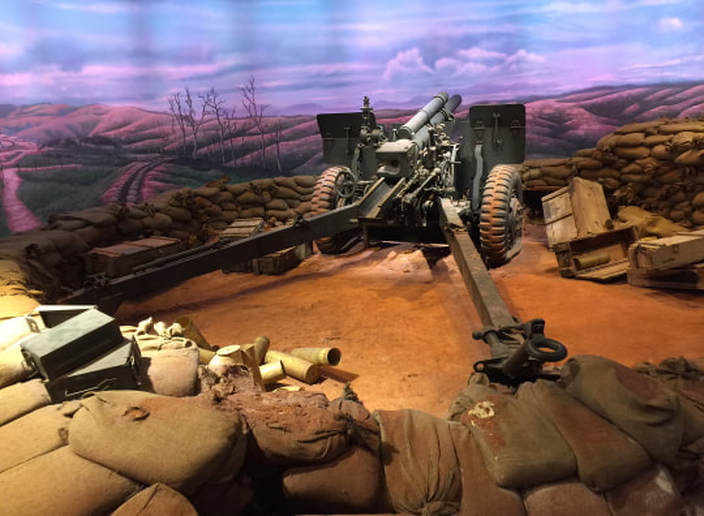 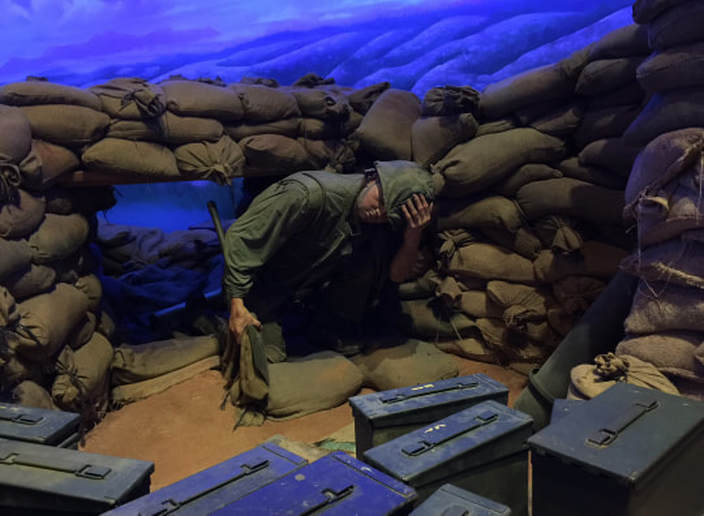 That concludes my quick look at the Quantico Museum. I really have not done it justice, but I hope I have given you a small taste of what is there. You can click on the link below to go to a second page that gives a quick review of the Motts Military Museum in Grovesport, Ohio.
CLICK HERE TO CONTINUE ON TO THE MOTTS MILITARY PAGE