Our 10th Annual FIGURECON took place during the 2018 Entertrainment Junction Scale Modeling Show over the March 3rd and 4th weekend. We had the most 1/6th vendors ever and a great crowd all weekend long. There was plenty of eye candy and lots of goodies to spend your hard earned cash on. A great time was had by one and all!

We start this CON's review with a modern day setup by club member, "BLACK JACK". As always his setup was top notch and filled with all kinds of modern American Soldier gear. 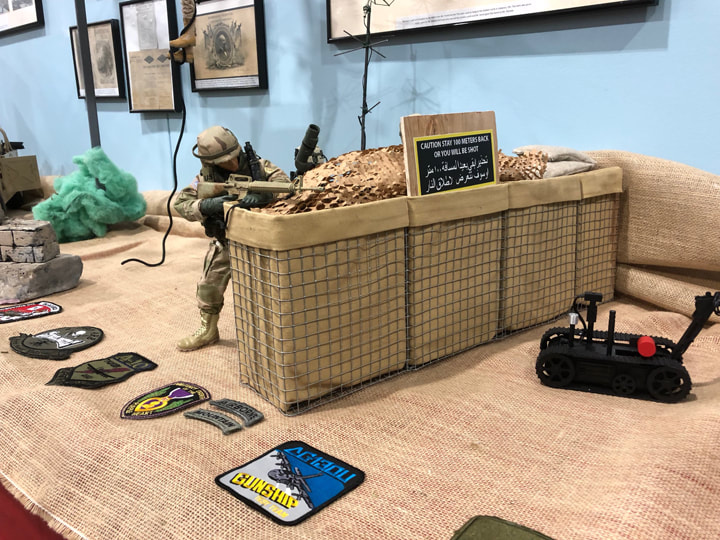 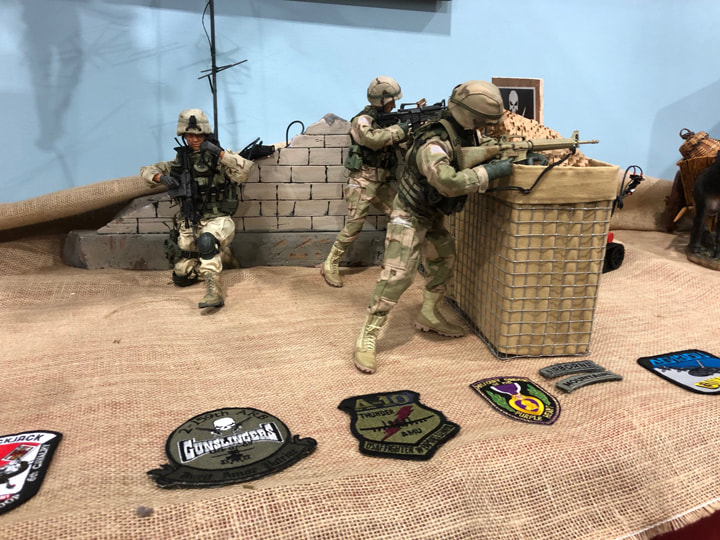 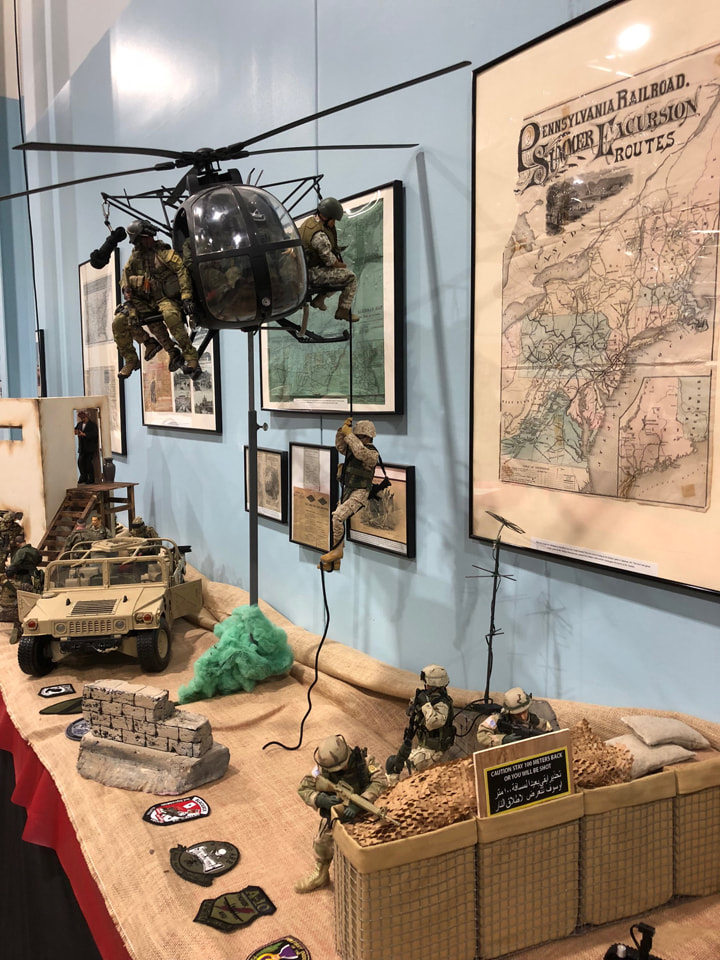 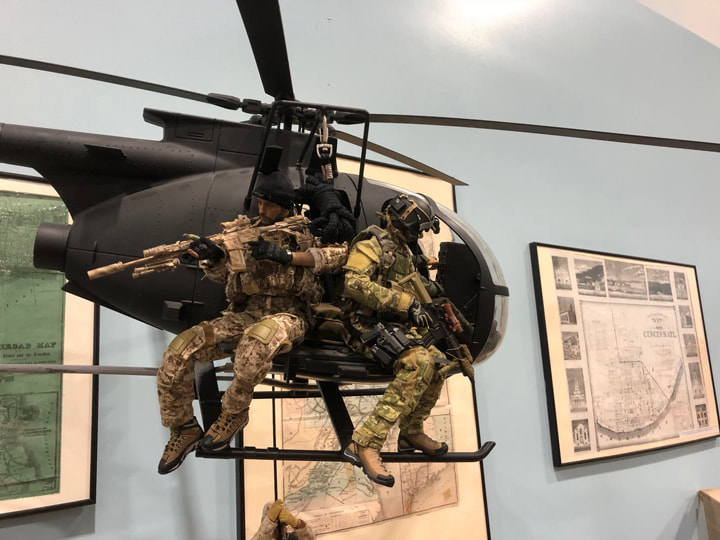 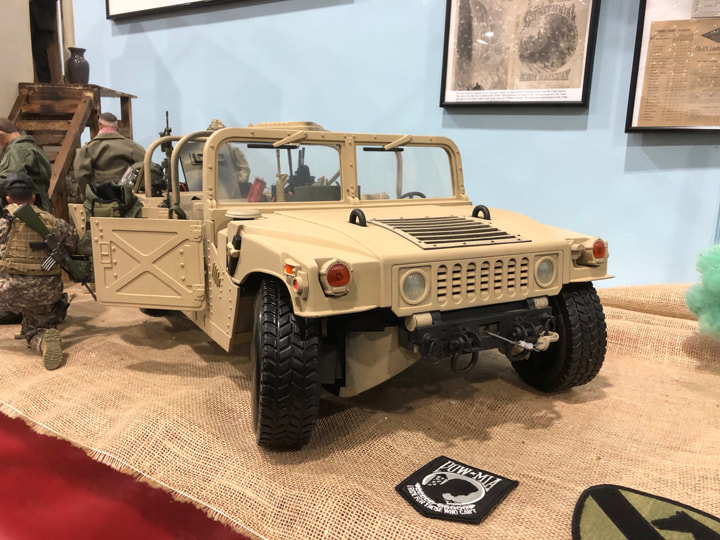 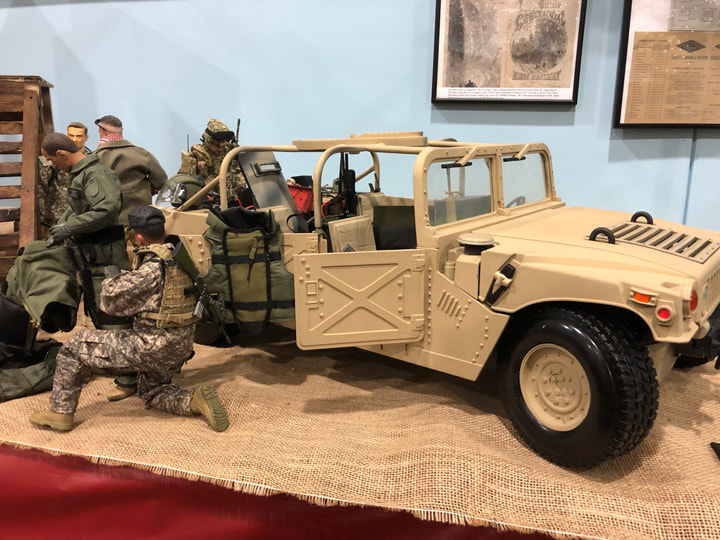 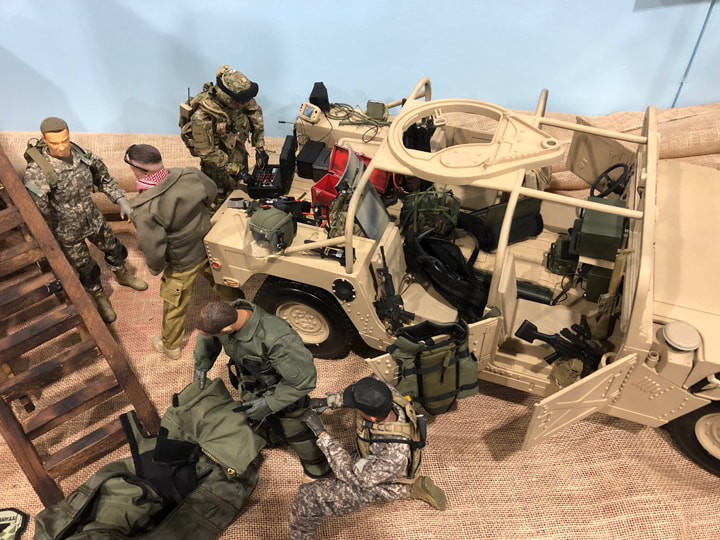 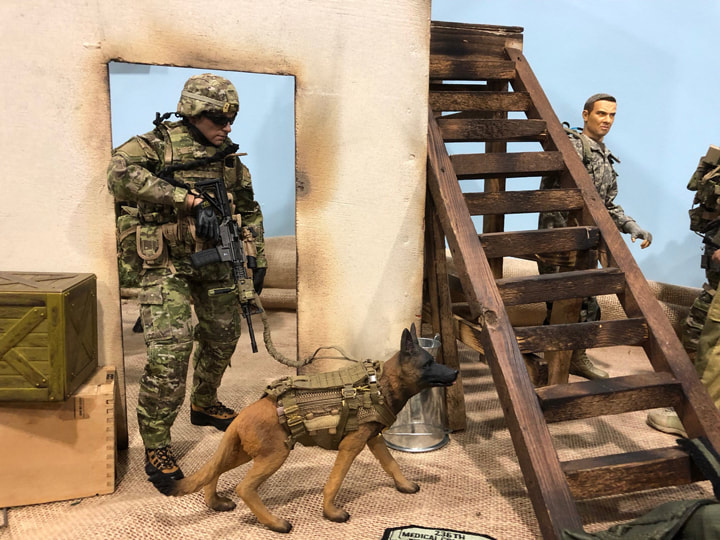 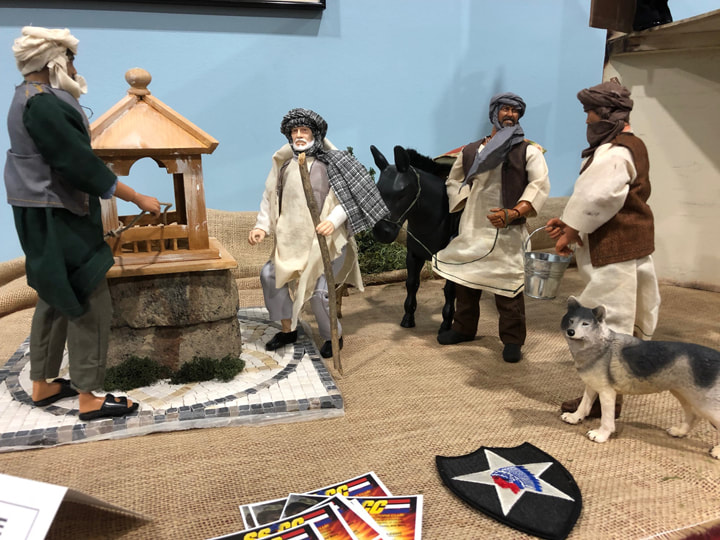 Next we saw some really outstanding figures from South Carolina members, "JOSH51st" and "PANZERIV". These two guys drove all the way up from the Palmetto State on Friday to be with us for the weekend. It was great to spend time with them talking about the hobby, etc. And their figures were outstanding.

We lead off with PANZERIV's German troops. He brought some really different figures, wearing uniforms that we don't normally see in 1/6th. They were all extremely well done. 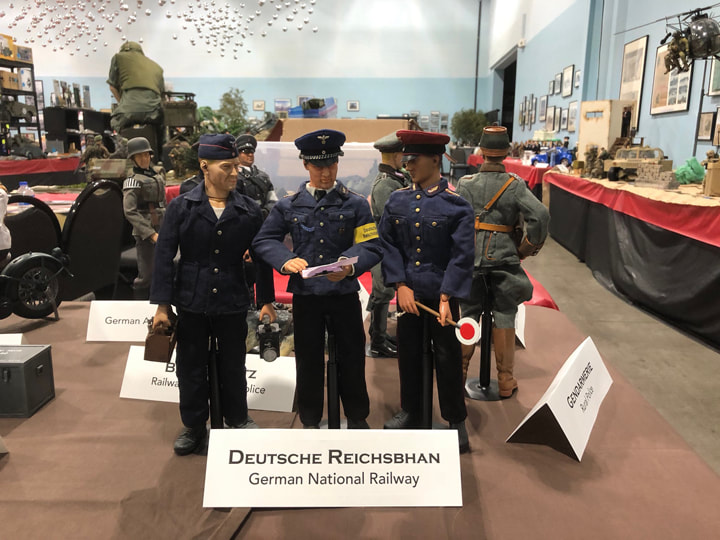 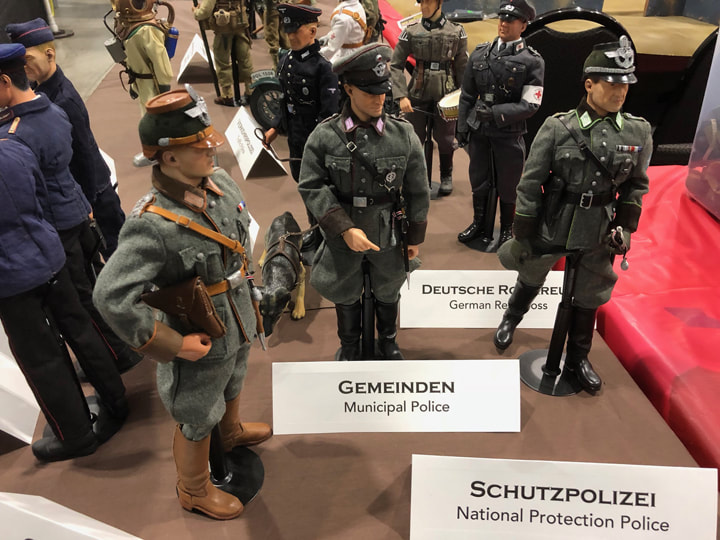 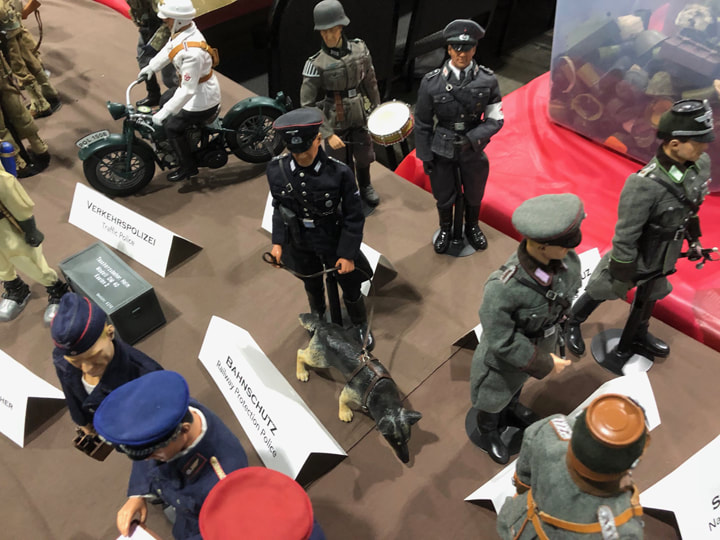 "JOSH51st " treated us to some great looking American troops. WWII Infantry and Marines and a lone Vietnam Era Infantryman that had me drooling. Really nice stuff Josh. 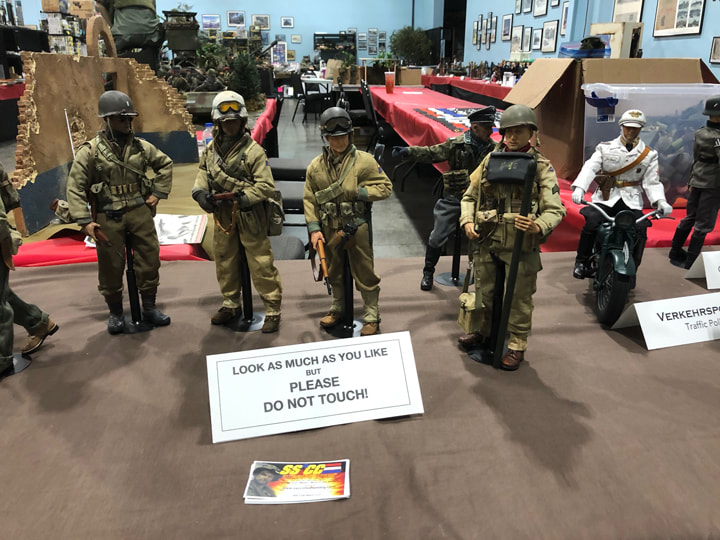 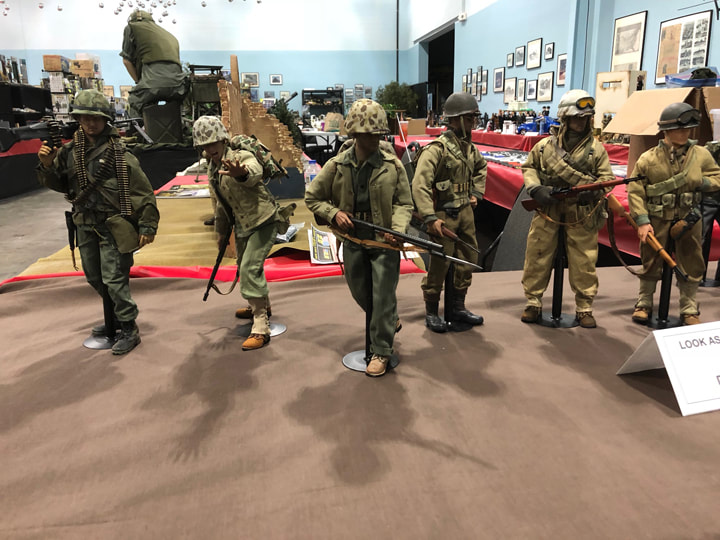 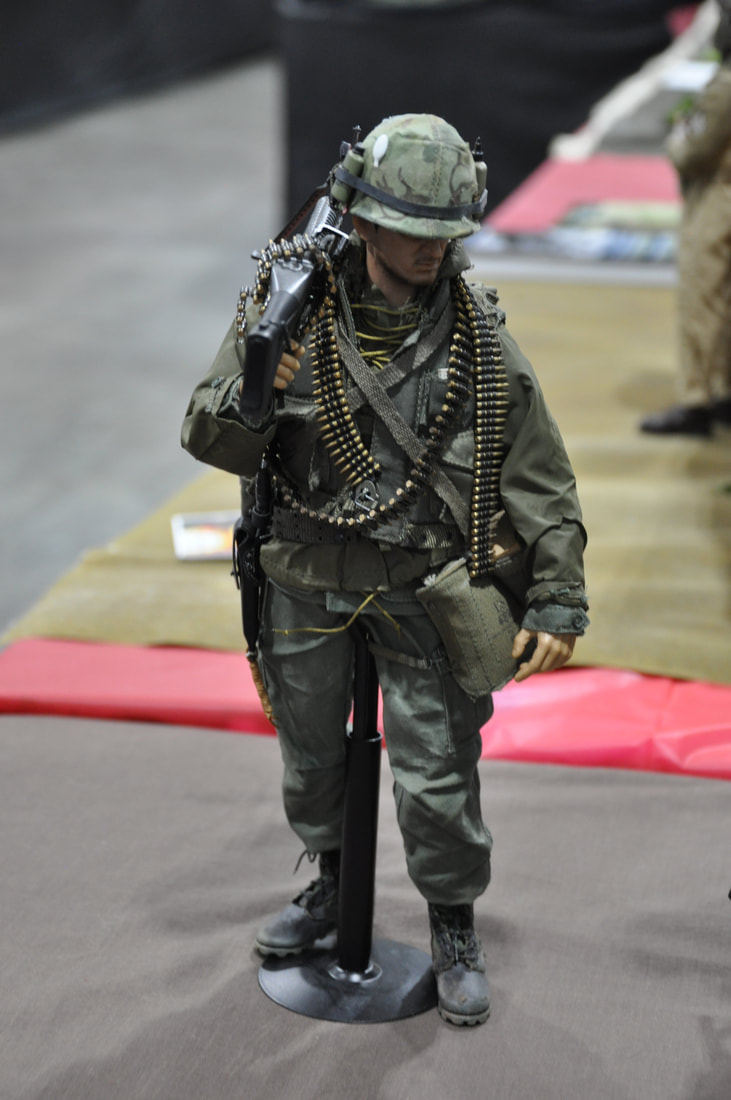 Panzercommander had this vignette featuring an American WWII Tanker and and incredible diorama piece of a stucco and brick ruined building. Both the building and the figure are absolutely amazing. 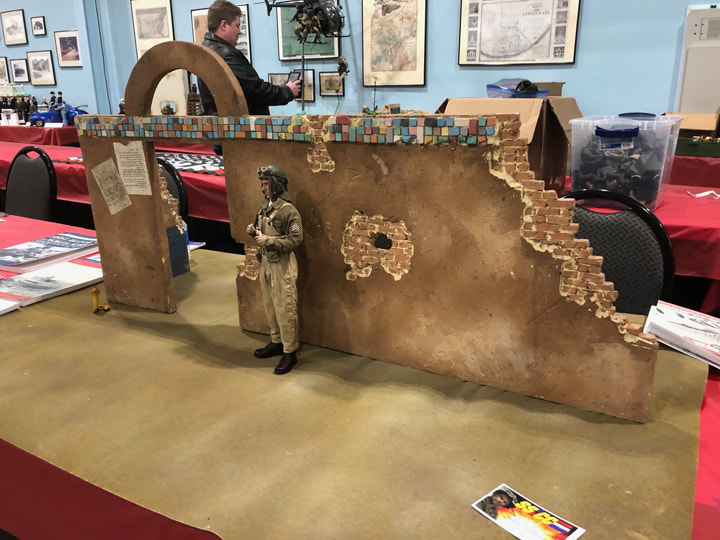 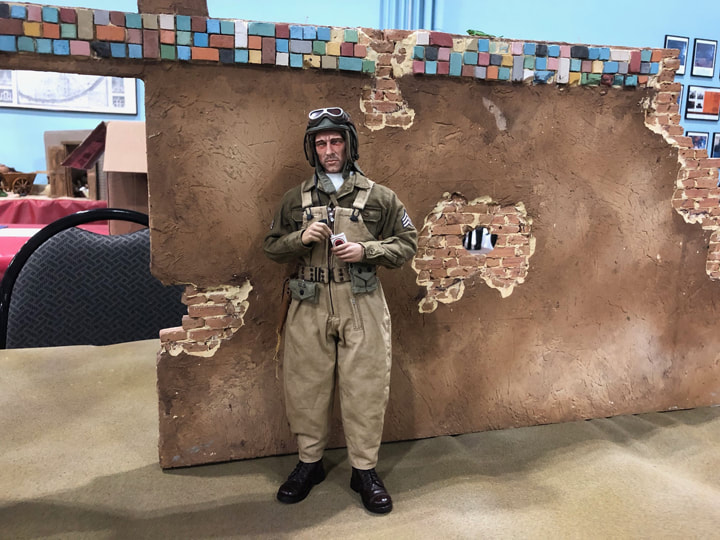 "J.KIDD" Had a ETO theme going on with two vignettes that he presented. The first was a group of Waffen SS Soldiers with a 21st Century Kublewagen that he had painted and lettered. As the "KIDD" liked Operation Market Garden, I am going to go out on a limb and say that these soldiers represent German forces at Arnham. His next vignette features British Paratroopers from the same operation. Very nicely done. 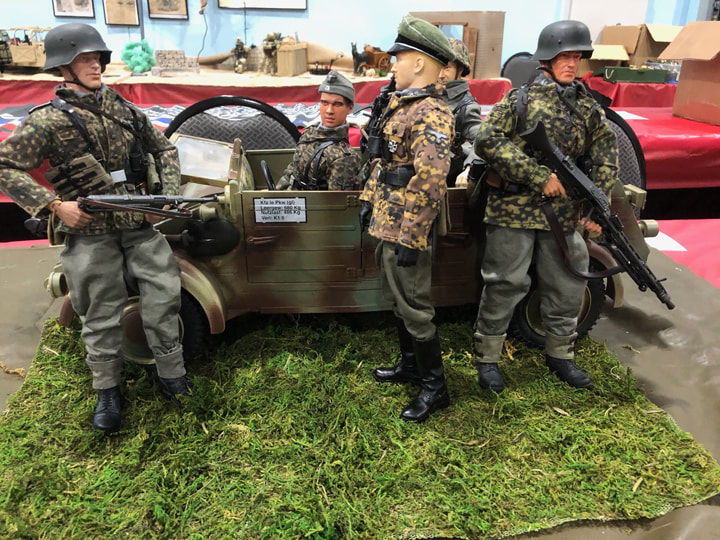 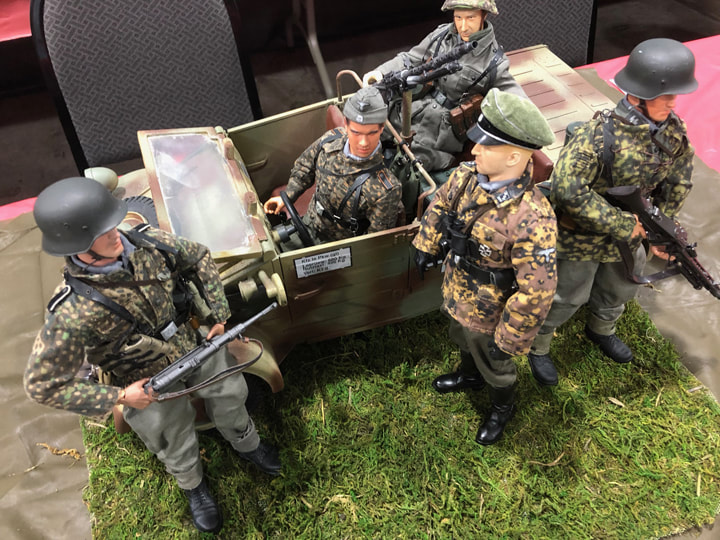 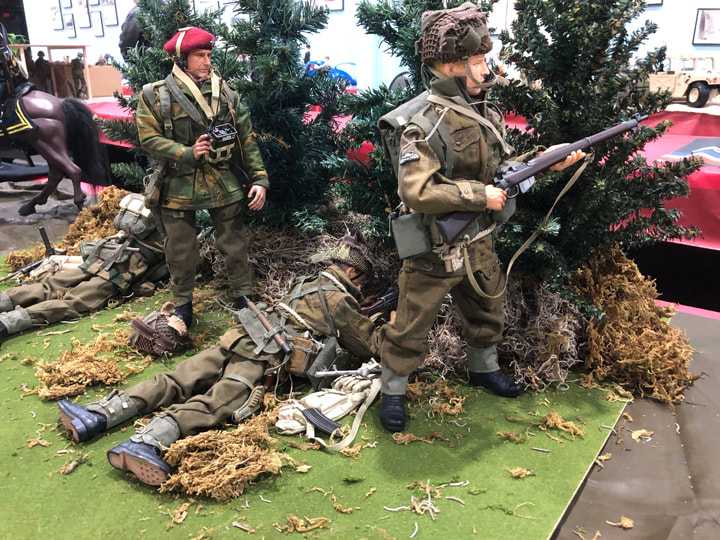 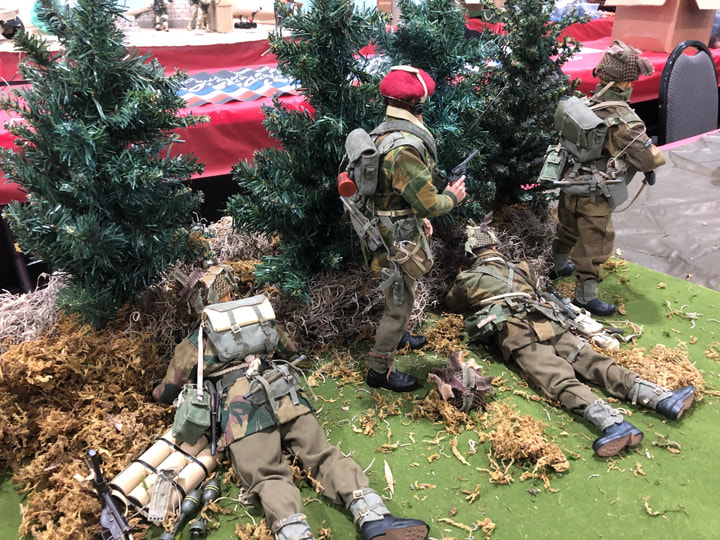 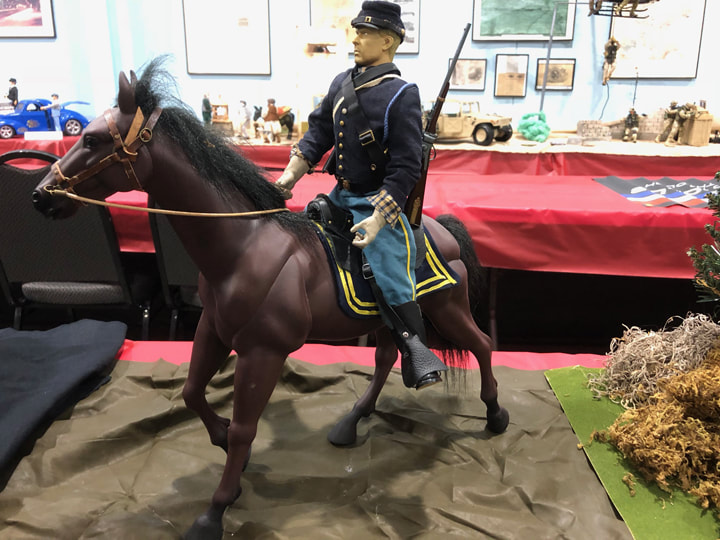 I, "POINT MAN", went with a Vietnam theme this year. My display featured a full size soldier with gear, my firebase diorama, a small jungle scene with 9th Infantry troops from my VIETNAM STORY comic and a 21st Century Little Bird helo which is being backdated to an OH-6, a WIP project that has been in progress for a couple of years now. Probably the best part of the weekend for me was meeting and talking with a real 9th Infantry veteran that actually fought with the 9th in Vietnam. 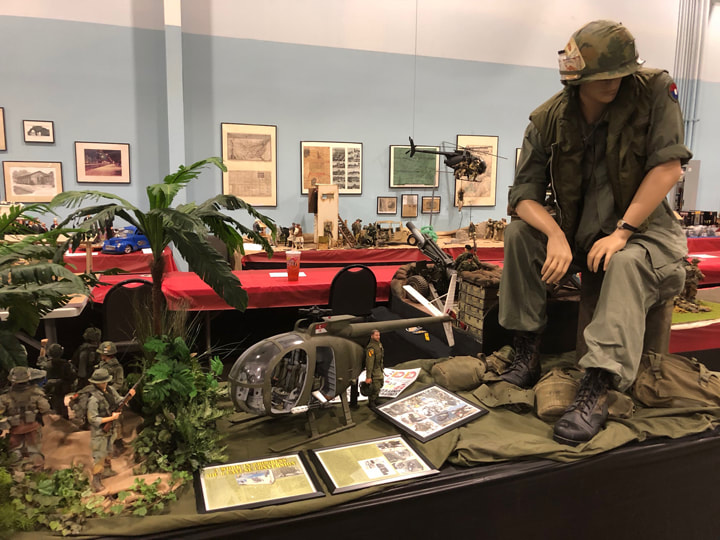 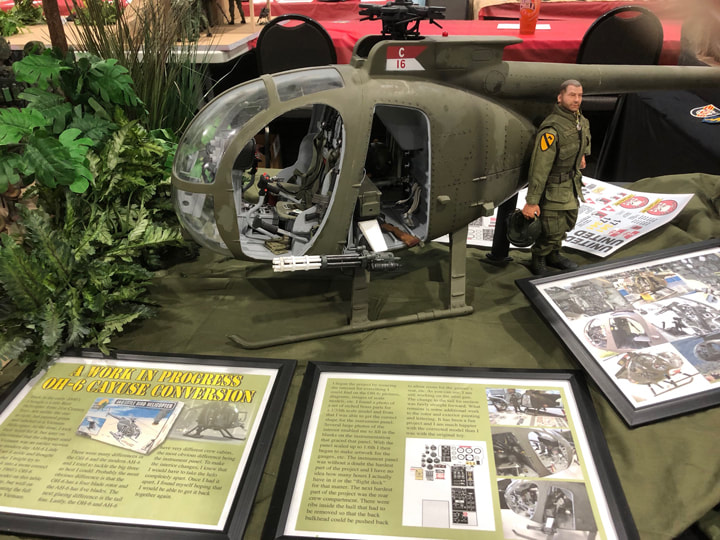 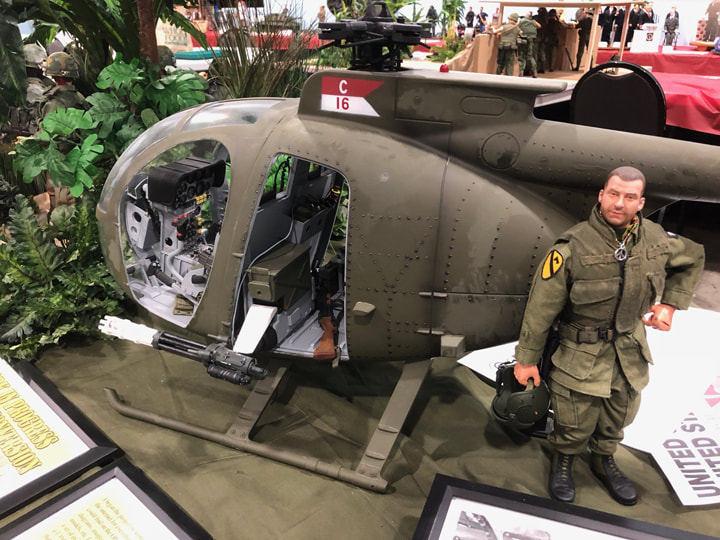 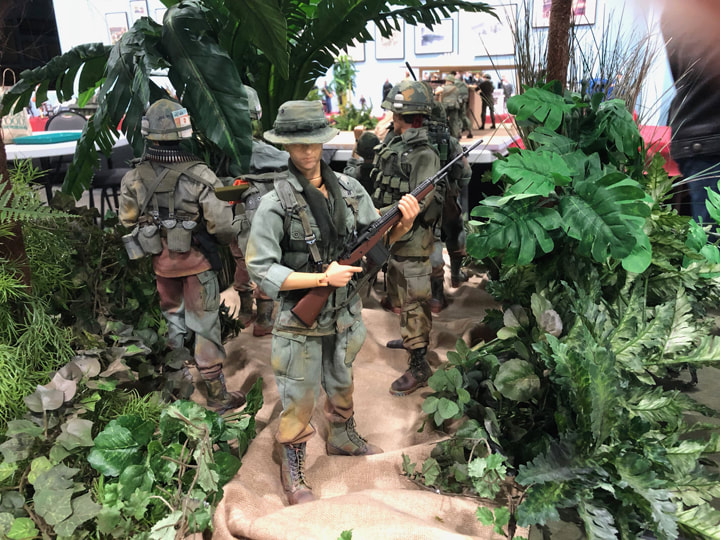 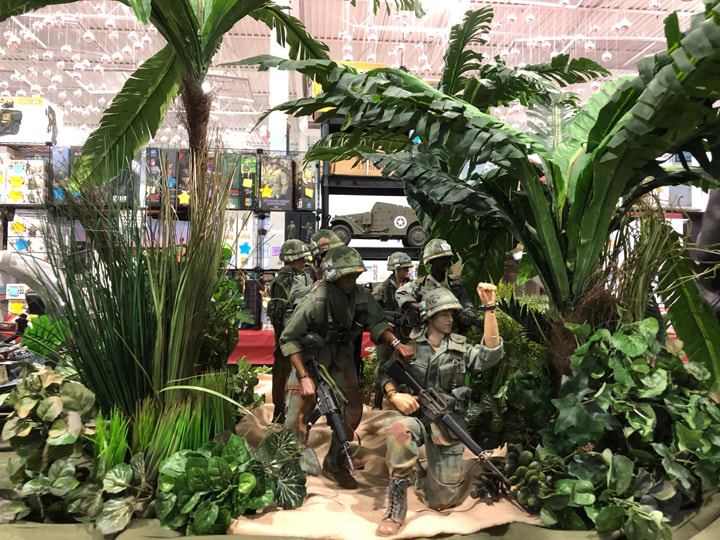 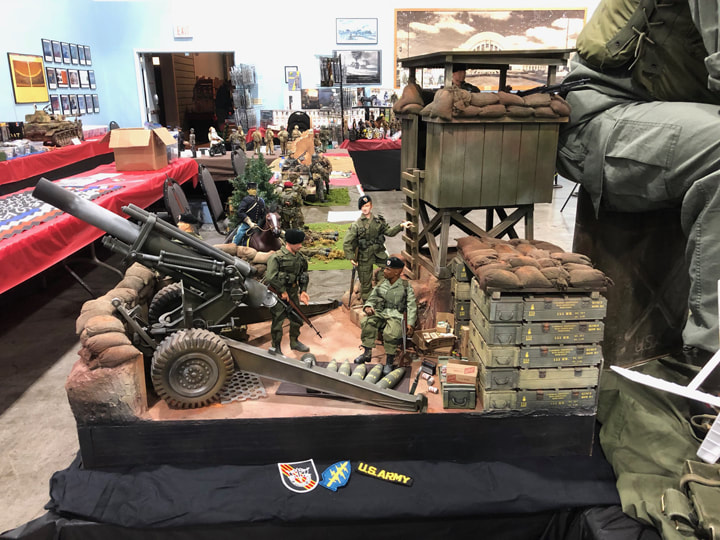 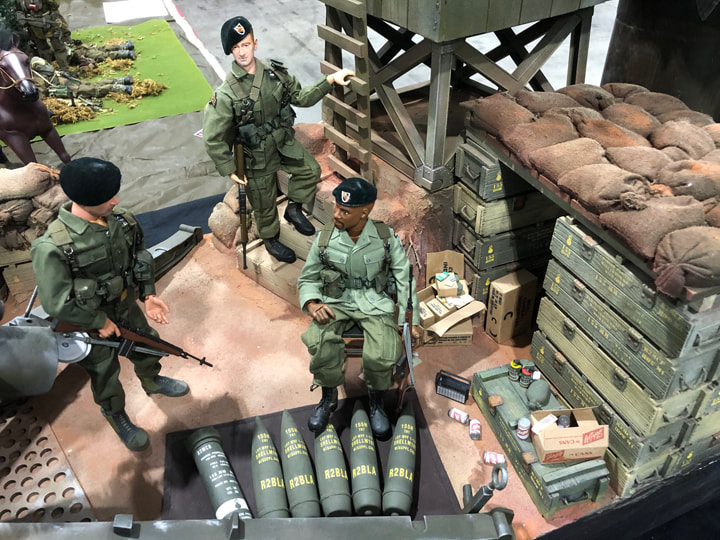